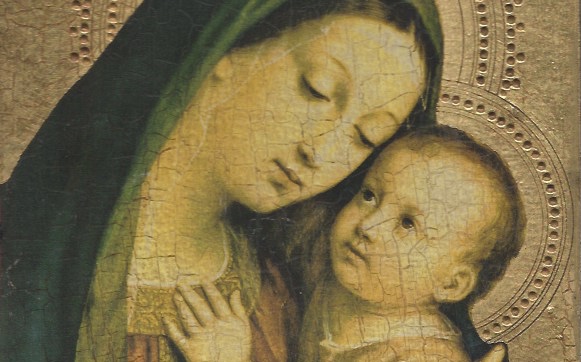 or, why Hug Cullompton hugs in the first place.

The Bible tells us that humankind is created in the image of God (Gen. 1.26-27) .  We are embodied, an immortal soul housed in a temporary shell (2 Cor.5.1-5).  Like Adam and Eve in Genesis chapter 2, we are meant not to be alone, but to live in relationship with others; and living in relationship with others – whether we like it or not – necessarily includes physical touch.

The importance of touch

That Jesus’ way of revealing his messianic identity runs contrary to accepted cultural norms, should be no surprise to those who know their Bible.  He is renowned for dining with sinners and befriending the lost.  But the most revealing encounters of all, those which flesh out the identity of Jesus as the most unconventional of saviours, invariably include touch:

And when, following the meal,  Jesus is arrested, the ultimate betrayal is committed through the most intimate of touches – a kiss (Mark 14.43-46 //).

After the resurrection Mary Magdalene reaches for him in the garden (John 20.15-18), Thomas is invited to touch his hands and his side (John 20.26-29), Jesus is bodily present as he walks alongside a couple on the road to Emmaus (Luke 24.13-35), conversing and sharing a meal with them, and soon afterwards he appears on the beach, cooking for, and sharing breakfast with, his disciples (John 21.4-14).

A whole host of scholars, including Ched Myers, NT Wright, James DG Dunn and Andrew Harvey, have explored at length the radical nature of Jesus’ ministry (see ‘Suggested Reading’ Below).  Bob Johnson, in his book When Heaven Invades Earth, suggests that the true greatness of Christ is revealed, not in messiahship as understood by his first century peers (they expected a revolutionary overthrower of the Imperial Roman Power), but in his solidarity with the poor, the disempowered, the lost and the alone. The most remarkable thing is Christ’s willingness to touch those considered untouchable – because, as sacred creations knitted together in their mother’s womb (Psalm 139), no-one is beyond God’s touch.

A major part of Jesus’ ministry was healing – bringing wholeness to others.  He cured physical diseases, but also relieved mental infirmities and offered forgiveness to those who needed it. Despite a cultural hesitancy to allow physical contact with people who were considered ‘unclean’ (due to illness or lack of morality)  Jesus was never hesitant in touching anyone. Early in the book of Luke, Jesus “lays hands” on all those who come to him at sundown for healing.  To heal a deaf man with speech difficulties he puts his fingers in the man’s ears, and spits on his hands then touches his tongue. Later a man’s sight is restored after Jesus mingles mud with spittle and rubs it on his eyes.  When a woman who has been suffering from menstrual problems for 18 years touches his cloak, Jesus feels the power go out of him. Although he has not seen who she is, it is the sense of touch which is important. Her reaching for him, combined with her faith in his ability to perform miracles, results in her miraculous healing from a longterm illness which, according to the culture of the time, had made her unclean in the eyes of her peers.

There is something both intimate and earthy about these physical expressions of loving service.  Jesus isn’t afraid of getting stuck in; of allowing human beings to be physically touched by God.  Although Jesus’ healing power is not dependent on touch –  he is recorded as both raising men from the dead and healing two children close to death without needing to be alongside the bodies or even present – there is an expectation that, by the laying on of hands, Jesus heals.

In acknowledging the importance of laying hands on someone, Jesus is being recognised by his peers as having more than a coincidental healing talent. His actions are equated with anointing. They are holy acts – acts which bring physical, emotional and spiritual wholeness to the person on which they are laid.

This focus on wholeness has been explored at length by the members of Hug Cullompton.  The way we eat, pray, exercise, laugh, live and worship, both together and in our daily lives, are discussed regularly. Wellbeing Wednesdays is our opportunity to extend our theology of touch to anyone who is in need of help, whether they come for regular ‘sessions’ or just pop in on the off-chance. The member who started Wellbeing Wednesdays is herself a healer and life coach, practising a variety of disciplines in order to help people look beyond physical symptoms to the emotional or spiritual issues might be at the root of their discomfort.

We never suggest that people stop taking the advice, medication or treatment offered by their GP and other health professionals, and we will often give details of nutritionists, osteopaths or other professionally qualified practitioners who we think might be able to help. But while the NHS really only has only limited resources to address medical problems, at Hug Cullompton we can give the time needed for to a person to begin to explore finding wholeness.

The touch of the Holy Spirit

During his final evening with the disciples, Jesus promised them an advocate, the Holy Spirit (John 14.25-26, 15.26-27; Acts 1.6-8).  This is the aspect of God which came to the apostles on the day of Pentecost, and the person of the Trinity which remains present in the world to this day.  In the book of Acts the coming of the Holy Spirit is described as being like tongues of fire, touching each one on the believers (Acts 2.1-3).  Throughout history followers of Jesus have described a similar experience when they feel the power of the Holy Spirit. It may not be seen or heard, but it is certainly experienced as a tangible ‘thing’.

Bill Johnson’s theology of healing is a pneumatological one (meaning it is founded on an understanding of how the Holy Spirit works in the world). He argues that, in becoming fully human, Jesus emptied himself of his divinity (Phil 2.5-10), and became entirely dependent on the power of Holy Spirit to carry out his work in the world.  It is through the power of the Holy Spirit that Christ heals infirmities, feeds thousands, stills storms and walks on water. Johnson’s conclusion is that, by the power of the same Spirit, all humans can equal this – a rather far fetched assumption to say the least!  However, the presumption that human empowerment, in the name of Christ and fuelled by the Holy Spirit, can achieve immeasurably more than can initially be envisaged, is not (Eph 3.20-21). Miracles do happen, healing does take place. I have seen with my own eyes, and experienced for myself, the healing power of prayer.

The Body of Christ in reaching out

From very early on in their history, Christian communities described themselves as  the Body of Christ (1 Cor. 12).  This understanding of corporate embodiment is a fundamental aspect of the common Christian life, both in the way individual members feel a tangible sense of attachment to each other, and how they reach out together to the world around them.

Hug Cullompton has certainly adopted an attitude of corporate embodiment. We committed, from day one, to be there for ourselves, each other and out town.  We have initiated projects which address personal wholeness and healing, but also others which embrace and promulgate a holistic vision for residents. We have made tea, given hugs, prayed with and ministered to a multitude of people in the past five years. In addition we have promoted talent, encouraged people to explore the Arts, raised money for the local swimming pool campaign and started an organisation providing friendship and purpose, specifically for men.

Our name – Hug Cullompton – is no coincidence. Both the title and ministry attached to it are based on a great deal of prayer, reflection and mutual love.  As a body we reach out to touch others – both individuals and organisations.  In committing to bring about wholeness to our town and its residents, we practice what Jesus both preached and demonstrated:

The Word became flesh and made his dwelling among us. We have seen his glory, the glory of the one and only Son, who came from the Father, full of grace and truth. (John 1.14)